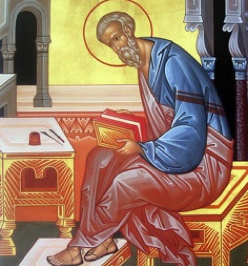 The Holy Apostle and Evangelist Matthew, was also named Levi (Mark 2:14; Luke 5:27); he was one of the Twelve Apostles (Mark 3:18; Luke 6:45; Acts 1:13), and was brother of the Apostle James Alphaeus (Mark 2:14). He was a publican, or tax-collector for Rome, in a time when the Jews were under the rule of the Roman Empire. He lived in the Galilean city of Capernaum. When Matthew heard the voice of Jesus Christ: “Come, follow Me” (Mt. 9:9), left everything and followed the Savior. Christ and His disciples did not refuse Matthew’s invitation and they visited his house, where they shared table with the publican’s friends and acquaintances. Like the host, they were also publicans and known sinners. This event disturbed the pharisees and scribes a great deal.

Publicans who collected taxes from their countrymen did this with great profit for themselves. Usually greedy and cruel people, the Jews considered them pernicious betrayers of their country and religion. The word “publican” for the Jews had the connotation of “public sinner” and “idol-worshipper.” To even speak with a tax-collector was considered a sin, and to associate with one was defilement. But the Jewish teachers were not able to comprehend that the Lord had “come to call not the righteous, but sinners to repentance” (Mt. 9:13). Matthew, acknowledging his sinfulness, repaid fourfold anyone he had cheated, and he distributed his remaining possessions to the poor, and he followed after Christ with the other apostles. St Matthew was attentive to the instructions of the Divine Teacher, he beheld His innumerable miracles, he went together with the Twelve Apostles preaching to “the lost sheep of the house of Israel” (Mt. 10:6). He was a witness to the suffering, death, and Resurrection of the Savior, and of His glorious Ascension into Heaven.

Having received the grace of the Holy Spirit, which descended upon the Apostles on the day of Pentecost, St Matthew preached in Palestine for several years. At the request of the Jewish converts at Jerusalem, the holy Apostle Matthew wrote his Gospel describing the earthly life of the Savior, before leaving to preach the Gospel in faraway lands.

In the order of the books of the New Testament, the Gospel of Matthew comes first. Palestine is said to be the place where the Gospel was written. St Matthew wrote in Aramaic, and then it was translated into Greek. The Aramaic text has not survived, but many of the linguistic and cultural-historical peculiarities of the Greek translation give indications of it.

The Apostle Matthew preached among people who were awaiting the Messiah. His Gospel manifests itself as a vivid proof that Jesus Christ is the Messiah foretold by the prophets, and that there would not be another (Mt. 11:3).

The preaching and deeds of the Savior are presented by the evangelist in three divisions, constituting three aspects of the service of the Messiah: as Prophet and Law-Giver (Ch. 5-7), Lord over the world both visible and invisible (Ch. 8-25), and finally as High Priest offered as Sacrifice for the sins of all mankind (Ch. 26-27).

The holy Apostle brought the Gospel of Christ to Syria, Media, Persia, Parthia, and finishing his preaching in Ethiopia with a martyr’s death. This land was inhabited by tribes of cannibals with primitive customs and beliefs. The holy Apostle Matthew converted some of the idol-worshippers to faith in Christ. He founded the Church and built a temple in the city of Mirmena, establishing there his companion Platon as bishop.

When the holy apostle was fervently entreating God for the conversion of the Ethiopians the Lord Himself appeared to him in the form of a youth. He gave him a staff, and commanded him to plant it at the doors of the church. The Lord said that a tree would grow from this staff and it would bear fruit, and from its roots would flow a stream of water. When the Ethiopians washed themselves in the water and ate the fruit, they lost their wild ways and became gentle and good.

When the holy apostle carried the staff towards the church, he was met by the wife and son of the ruler of the land, Fulvian, who were afflicted by unclean spirits. In the Name of Christ the holy apostle healed them. This miracle converted a number of the pagans to the Lord. But the ruler did not want his subjects to become Christians and cease worshiping the pagan gods. He accused the apostle of sorcery and gave orders to execute him.

They put St Matthew head downwards, piled up brushwood and ignited it. When the fire flared up, everyone then saw that the fire did not harm St Matthew. Then Fulvian gave orders to add more wood to the fire, and frenzied with boldness, he commanded to set up twelve idols around the fire. But the flames melted the idols and flared up toward Fulvian. The frightened Ethiopian turned to the saint with an entreaty for mercy, and by the prayer of the martyr the flame went out. The body of the holy apostle remained unharmed, and he departed to the Lord. The ruler Fulvian deeply repented of his deed, but still he had doubts. By his command, they put the body of St Matthew into an iron coffin and threw it into the sea. In doing this Fulvian said that if the God of Matthew would preserve the body of the apostle in the water as He preserved him in the fire, then this would be proper reason to worship this One True God.

That night the Apostle Matthew appeared to Bishop Platon in a dream, and commanded him to go with clergy to the shore of the sea and to find his body there. The righteous Fulvian and his retinue went with the bishop to the shore of the sea. The coffin carried by the waves was taken to the church built by the apostle. Then Fulvian begged forgiveness of the holy Apostle Matthew, after which Bishop Platon baptized him, giving him the name Matthew in obedience to a command of God.

Soon St Fulvian-Matthew abdicated his rule and became a presbyter. Upon the death of Bishop Platon, the Apostle Matthew appeared to him and exhorted him to head the Ethiopian Church. Having become a bishop, St Fulvian-Matthew toiled at preaching the Word of God, continuing the work of his heavenly patron. (from the OCA website)

The Mission of The Orthodox Church in America, the local autocephalous Orthodox Christian Church, is to be faithful in fulfilling the commandment of Christ to “Go into all the world and make disciples of all nations, baptizing them in the name of the Father, and of the Son and of the Holy Spirit…”

Saint Matthew Orthodox Church is part of the Diocese of the Midwest, which is presided over by The Right Reverend Paul (Gassios), Bishop of Chicago. Our mission is bringing the joy of Christ's resurrection to those who have never heard the Good News, and to strengthen and encourage the faithful who reside within the Green Bay vicinity.

The Holy Scripture is a collection of books written over multiple centuries by those inspired by God to do so. It is the primary witness to the Orthodox Christian faith, within Holy Tradition and often described as its highest point. It was written by the prophets and apostles in human language, inspired by the Holy Spirit, and collected, edited, and canonized by the Church.

Holiness or sainthood is a gift (charisma) given by God to man, through the Holy Spirit. Man's effort to become a participant in the life of divine holiness is indispensable, but sanctification itself is the work of the Holy Trinity, especially through the sanctifying power of Jesus Christ, who was incarnate, suffered crucifixion, and rose from the dead, in order to lead us to the life of holiness, through the communion with the Holy Spirit.